Shalam, Before Israel went into captivity, the Most High had given them a calendar different from the rest of the world when he brought them forth up out of the land of Egypt. He gave them certain days to follow, certain months to observe, certain years to observe, and certain times that they should be observed. Israel was separate from every nation upon the face of the earth. They only had the Most High as the true power, while all the nations envied and despised them because the Most High had chosen Israel as his people instead of them. America gets all of there Symbols and Signs from the Ancient Babylonians and the Egyptians. Everything is based and or leading back to a Pagan God.

Psalm 96:4-5  For the LORD is great, and greatly to be praised: he is to be feared above all gods.
5  For all the gods of the nations are idols: but the LORD made the heavens.

Days of the Week

Sunday -  Named after the Sun. Sunday, Latin dies solis  ("day of the sun"), which is a translation of of Greek heméra helíou. The 1st day of the week.

Monday - Named after the Moon. Monday, Latin lunae dies  ("day of the moon"). The 2nd day of the week.

Tuesday - Named after Tiu, the Norse god of war.  Tuesday ("Day of Mars,") from the Roman god of war, who was identified with Gmc. The 3rd day of the week.

Wednesday -  Named after Woden, the Anglo-Saxon chief of the gods. The name Wednesday comes from the Middle English Wednes dei , which is from Old English language Wēdnes dæg , meaning the day of the English god Woden ( Wodan ) who was a god of the Anglo-Saxons in England until about the 7th century. Wēdnes dæg  is like the Old Norse Oðinsdagr  (" Odin's day"), which is an early translation of the Latin dies Mercurii  ("Mercury's day"), and reflects the widespread association of Woden with Mercury going back to Tacitus. In Romance languages it is derived from the name of the Roman god Mercury. the 4th day of the week;

Friday - Named after Freyja, a Norse goddess of love. The meaning of Frige the Anglo-Saxon form of Frigg, a West Germanic translation of Latin dies Veneris , "day (of the planet) Venus." The 6th day of the week. ("Venus Day")

Saturday - Named after Saturn, Roman god of harvests and time. The planet (Saturn), which controlled the first hour of that day according to Vettius Valens. The planet was named for the Roman god of agriculture Saturn. It has been called dies Saturni  ("Saturn's Day"), through which from it entered into Old English as Sæternesdæg  and gradually evolved into the word "Saturday". The 7th day of the week.

(The English names of all of the days of the week come from Anglo-Saxon polytheism.)

Days of the Month

Month - Named after "Munt" , which originally was the local deity of Hermonthis. Hermonthis, ancient city, N Egypt, 8 mi (13 km) S of Thebes. It was founded in prehistoric times and was prominent during the period of Roman supremacy. Originally the shrine of Month, later the war-god of the Egyptian king; represented as falcon-headed.

Named after Janus, Roman god of doors and gates. Janus, in Roman religion, god of beginnings. He was one of the principal Roman gods, the custodian of the universe. The first hour of the day, the first day of the month, the first month of the year (which bears his name) were sacred to him. His chief function was as guardian deity of gates and doors. The gates of his temple in the Roman Forum were closed in time of peace and opened in time of war. Janus was usually represented with two bearded heads placed back to back so that he might look in two directions at the same time. His principal festival was celebrated on the first day of the year. 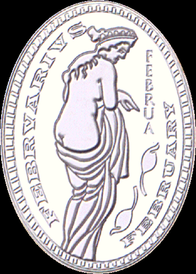 February -Named after Februa, Roman period of purification. Februa , also Februatio was the Roman festival of purification, also commonly referred to as Lupercalia (see for more complete information on the holiday). The festival, which is basically one of Spring washing or cleaning (associated also with the raininess of this time of year) is old, and possibly of Sabine origin. According to Ovid, Februare  as a Latin word which refers to means of purification (particularly with washing or water) derives from an earlier Etruscan word referring to purging The Roman month Februarius ("of Februa," whence the English February) is named for the Februa/Februatio festival, which occurred on the 15th day of the Roman month. A later Roman god Februus personified both the month and also purification, and is named for them. Thus, the month is named for the festival and not for the god. 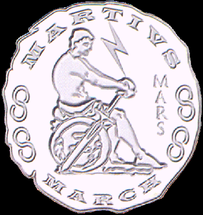 March -Named after Mars, Roman god of war. Mars,  in Roman religion and mythology, god of war. In early Roman times he was a god of agriculture, but in later religion (when he was identified with the Greek Ares) he was primarily associated with war. Mars was the father of Romulus, the founder of the Roman nation, and, next to Jupiter, he enjoyed the highest position in Roman religion. The Salii, his priests, honored him by dancing in full armor in the Campus Martius, the site of his altar. Chariot races and the sacrifice of animals were primary features of the festivals held in his honor in March (named for him) and October. Mars was represented as an armed warrior. His attributes include the spear and shield, and the wolf and woodpecker were sacred to him. He was frequently associated with Bellona, the Roman goddess of war. 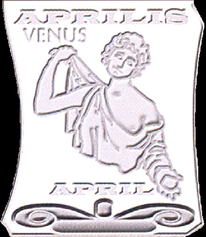 April -from the Latin apeire, 'to open'. Apéritif is a French word, which, like its Italian counterpart, aperitivo, comes from the Latin aperire, meaning "to open."  because spring generally begins, and the buds open in this month. 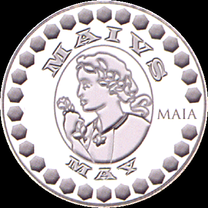 May - Named after Maia, Roman goddess of spring and growth. Maia, 1  In Greek mythology, oldest of the Pleiades. She was the mother of Hermes by Zeus. 2  In Roman mythology, goddess of fertility; also called Maiesta. She was often identified with Bona Dea. The month of May was probably named for her. The Columbia Electronic Encyclopedia Copyright © 2004. 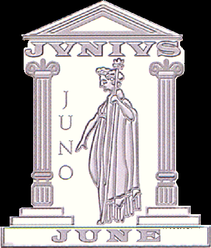 June -Named after Juno, Roman goddess of marriage. The chief goddess and female counterpart of Jupiter. She was identified with the Greek goddess Hera. With Jupiter and Minerva she was a member of the Capitoline triad of deities traditionally introduced into Rome by the Etruscans. She was connected with all aspects of the lives of women, particularly marriage. Individualized, she became a female guardian spirit; as every man had his genius, so every woman had her juno. Her temple in Rome eventually housed the Roman mint, and she was invoked as the savior of the state. Her sacred bird was the peacock. 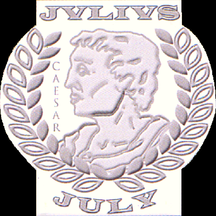 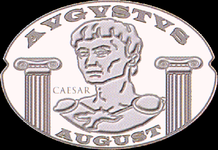 August - Named after Augustus, first emperor of Rome. Augustus , 63 B.C. - A.D.  14, first Roman emperor, a grandson of the sister of Julius Caesar. Named at first Caius Octavius, he became on adoption by the Julian gens (44 B.C.) Caius Julius Caesar Octavianus (Octavian); Augustus was a title of honor granted (27 B.C.) by the senate. 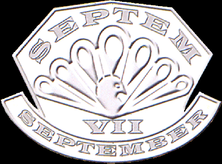 September -from the Latin septem, 'seven'. September is the magical seventh month in the original ten-month Roman calendar. It was the time of the Ludi Romani, the great games in honour of Jove (Jupiter) which ran from the 5-19 of the month. The games were spectacular affairs beginning with parades to honour the gods and culminating with chariot races at the Circus Maximus. 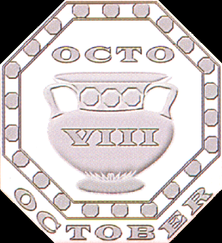 October - from the Latin octo, 'eight'. October is the tenth month of the year in the Gregorian Calendar and one of seven Gregorian months with a length of 31 days. The eighth month in the old Roman calendar, October retained its name (from the Greek " octo " meaning "eight") when January and February were added. October was a month of many festivals to honour Jupiter and Juno. As Jupiter was a wine god, much wine was consumed in his honour and celebrations often got out of hand. Apart from wine, feasts and games were also held in the god's honour and these were open to everyone. Sacrifices were offered on the field of Mars.

November - from the Latin novem, 'nine'. September  is the ninth month of the year in the Gregorian Calendar and one of four Gregorian months with 30 days. d In Latin, septem  means " seven" and septimus means " seventh"; September was in fact the seventh month of the Roman calendar until 153 BC, when there was a calendar reform from the month of the Ides of March to the Kalends, or January 1. November was considered a lucky month as it was virtually free of any religious obligation. It was traditionally the beginning of the Roman winter and a time for many festivals of feasting, games and wine drinking. 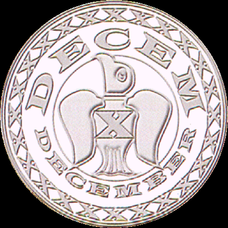 December -from the Latin decem, 'ten'. December is the twelfth and last month of the year in the Gregorian Calendar and one of seven Gregorian months with the length of 31 days. In Latin, decem means " ten". December was also the tenth month in the Roman calendar until a monthless winter period was divided between January and February. December began with the festival of Neptune, the god of sea and water, or Poseidon to the Greeks. The end of December signified the beginning of the solar year. During December the Romans observed the 'Halycon Days', seven days of peace and calm prior to the Winter Solstice and another seven days after it.
Colossians 2:8  Beware lest any man spoil you through philosophy and vain deceit, after the tradition of men, after the rudiments of the world, and not after Christ.