"Sunday, the first day of the week, is heralded today as the "Christian Sabbath". But it has not always been so!  Since ancient times, Sunday has been a day in  which pagans, witches, shamans, and other occult and spiritualistic peoples worshipped the sun, hence the name--Sun-day. It was not a day to worship the  God of heaven, but to worship the god of this earth--Lucifer or Satan or the  devil, and can be traced all the way back to ancient Babylon and  Nimrod. As the first day of the week is almost universally observed by Christians today instead of the seventh day Sabbath of creation which the Creator required that we must  remember to keep holy (see Genesis 2:2-3; Exodus 20:8-11), the question needs to be asked: When was this change made? The Roman Catholic Church states: "Perhaps the boldest thing, the most revolutionary change the Church ever did, happened  in the first century. The holy day, the Sabbath, was changed from Saturday  to Sunday. 'The day of the Lord' was chosen, not from any direction noted in the Scriptures, but from the Church's sense of its own power. People who  think that the Scriptures should be the sole authority, should logically. keep Saturday holy." St. Catherine Church Sentinel, Algonac, Michigan, May 21, 1995. 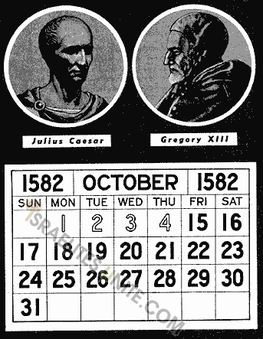 Revelation 18:24  And in her was found the blood of prophets, and of saints, and of all that were slain upon the earth.

(The Roman Catholic Church has changed the Sabbath day to Sunday, due to them worshipping the Sun. All religion is Evil. The Saints are the 12 Tribes of Israel and we have no religion; we have Commandments, Laws and Statutes to live by and we are a Holy people)


"Sunday is founded, not of scripture, but on tradition, and is distinctly a Catholic institution. As there is no scripture for the transfer of the day of rest from the last to the first day of the week, Protestants ought to keep their Sabbath on Saturday and thus leave Catholics in full possession of Sunday." Catholic Record, September 17, 1893.

"For example, nowhere in the Bible do we find that Christ or the Apostles ordered that the Sabbath be changed from Saturday to Sunday. We have the commandment of God given to Moses to keep holy the Sabbath day, that is the 7th  day of the week, Saturday. Today most Christians keep Sunday because it has been revealed to us by the Roman Catholic church outside the Bible." Catholic Virginian, October 3, 1947, p. 9, article " To Tell You the Truth."


"Is not every Christian obliged to sanctify Sunday and to abstain on that day from unnecessary servile work? Is not the observance of this law among the most prominent of our sacred duties?  But you may read the Bible from Genesis to Revelation, and you will not find a single line authorizing the sanctification of Sunday. The Scriptures enforce the religious observance of Saturday, a day  which we never sanctify."
James Cardinal Gibbons, The Faith of Our Fathers (1917 edition), p. 72-73 (16th Edition, p 111; 88th Edition, p. 89).

Who Made Sunday Holy? 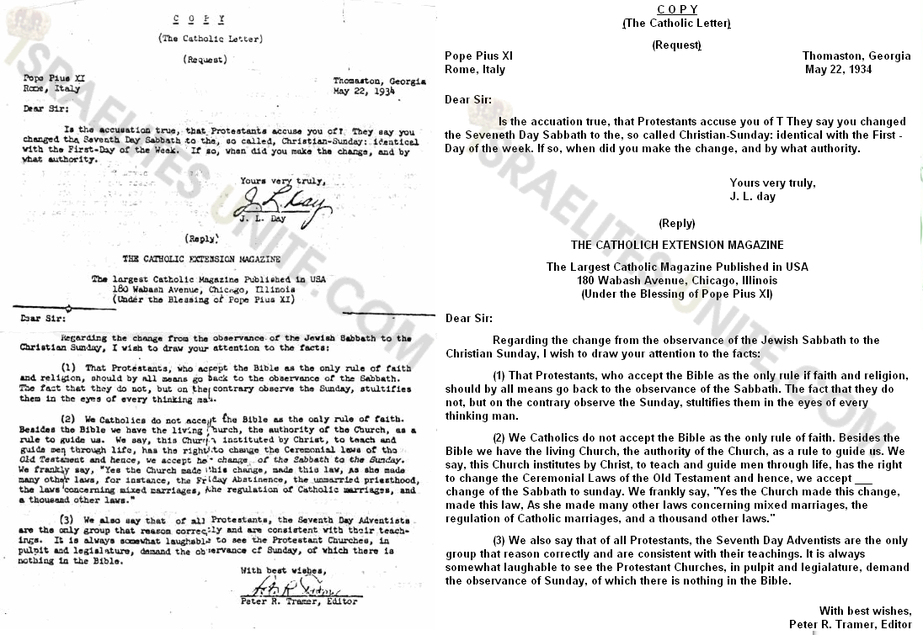 "Written by the finger of God on two tables of stone, this Divine code (ten commandments) was received from the Almighty by Moses amid the thunders of Mount  Sinai...Christ resumed these Commandments in the double precept of charity--love  of God and of the neighbour; He proclaimed them as binding under the New Law in  Matthew 19 and in the Sermon on the Mount (Matthew 5)....The (Catholic) Church,  on the other hand, after changing the day of rest from the Jewish Sabbath, or  seventh day of the week, to the first, made the Third Commandment refer to  Sunday as the day to be kept holy as the Lord's Day....He (God) claims one day  out of the seven as a memorial to Himself, and this must be kept holy..." The  Catholic Encyclopedia, vol. 4, "The Ten Commandments", 1908 edition by  Robert Appleton Company; and 1999 On-line edition by Kevin Knight, Imprimatur, John M. Farley, Archbishop of New York.


"Question: How prove you that the church had power to command feasts and  holydays?
"Answer: By the very act of changing the Sabbath into Sunday, which Protestants allow of;  and therefore they fondly contradict themselves by keeping Sunday strictly, and  breaking most other feasts commanded by the same church.
"Question:  Have you any other way of proving that the church has power to institute festivals of precept?
"Answer:  Had she not such power, she could not a done that in which all modern  religionists agree with her; -she could not have substituted the observance of  Sunday the first day of the week, for the observance of Saturday the seventh day  of the week, a change for which there is no Scriptural authority."  Stephen  Keenan, A Doctrinal Catechism On the Obedience Due to the Church, 3rd  edition, Chapter 2, p. 174 (Imprimatur, John Cardinal  McCloskey, Archbishop of  New York).


"Perhaps  the boldest thing, the most revolutionary change the Church ever did, happened  in the first century. The holy day, the Sabbath, was changed from Saturday to Sunday.  ‘The day of the Lord’ was chosen, not from any direction noted in the Scriptures, but from the Church's sense of its own power....People who think  that the Scriptures should be the sole authority, should logically...keep Saturday holy." St. Catherine Church Sentinel, Algonac, Michigan, May 21,  1995.


"Nowhere in the Bible is it stated that worship should be changed from Saturday  to Sunday....Now the Church...instituted, by God's authority, Sunday as the day of worship. This same Church, by the same divine authority, taught the doctrine of Purgatory long before the Bible was made.  We have, therefore, the same authority for Purgatory as we have for Sunday." Martin J. Scott, Things Catholics Are Asked About, 1927 edition, p.136.


"The Catholic church for over one thousand years before the existence of a Protestant, by virtue of her divine mission, changed the day from Saturday to Sunday. The Protestant World at its birth found the Christian Sabbath too strongly entrenched to run counter to its existence; it was therefore placed under the necessity of acquiescing in the arrangement, thus implying the (Catholic) Church's right to change the day, for over three hundred years. The christian Sabbath is therefore to this day, the acknowledged offspring of  the Catholic Church as spouse of the Holy Ghost, without a word of remonstrance  from the Protestant World." James Cardinal Gibbons in the Catholic  Mirror, September 23, 1983.

Whose Day of Worship is Sunday?

"They (the Protestants) deem it their duty to keep the Sunday holy. Why? Because the Catholic Church tells them to do so.  They have no other reason....The observance of Sunday thus comes to be an ecclesiastical law entirely distinct from the divine law of Sabbath observance....The author of the Sunday law...is the Catholic Church." Ecclesiastical Review, February, 1914.


"Sunday is  a Catholic institution and its claim to observance can be defended only on  Catholic principles....From beginning to end of Scripture there is not a single passage that warrants the transfer of weekly public worship from the last day of  the week to the first." Catholic Press, Sydney, Australia, August, 1900.


"It is well  to remind the Presbyterians, Baptists, Methodists, and all other Christians,  that the Bible does not support them anywhere in their observance of Sunday. Sunday is an institution of the Roman Catholic Church, and those who observe  the day observe a commandment of the Catholic Church." Priest Brady, in an address reported in The News, Elizabeth, New Jersey, March 18, 1903.

Who Are We Reverencing, Bowing and Paying Homage to by Keeping Sunday Holy?


"From this  we may understand how great is the authority of the church in interpreting or explaining to us the commandments of God - an authority which is acknowledged by the universal practice of the whole Christian world, even of those sects which profess to take the holy Scriptures as their sole rule of faith, since they observe as the day of rest not the seventh day of the week demanded by the Bible, but the first day. Which we know is to be kept holy, only from the tradition and teaching of the Catholic church." Henry Gibson, Catechism Made  Easy, # 2, 9th edition, vol. 1, p. 341-342.


"It was the Catholic church which...has transferred this rest to Sunday in remembrance of  the resurrection of our Lord. Therefore the observance of Sunday by the Protestants is an homage they pay, in spite of themselves, to the authority of  the (Catholic) church." Monsignor Louis Segur, Plain Talk About the  Protestantism of Today, p. 213.


"Sunday is our mark or authority...the church is above the Bible, and this transference of  Sabbath observance is proof of that fact." Catholic Record of London,  Ontario, September 1,1923.


"Of course  the Catholic Church claims that the change (Saturday Sabbath to Sunday) was her  act...And the act is a mark of her ecclesiastical authority in religious  things." H.F. Thomas, Chancellor of Cardinal Gibbons.


"I have  repeatedly offered $1,000 to anyone who can prove to me from the Bible alone  that I am bound to keep Sunday holy. There is no such law in the Bible. It is  a law of the holy Catholic Church alone. The Bible says, ‘Remember the Sabbath  day to keep it holy.’ The Catholic Church says: ‘No.  By my divine power I  abolish the Sabbath day and command you to keep holy the first day of the week.’ And lo! The entire civilized world bows down in a reverent obedience to the  command of the holy Catholic Church." father T. Enright, C.S.S.R. of the  Redemptoral College, Kansas City, in a lecture at Hartford, Kansas, February 18, 1884, printed in History of the Sabbath, p. 802.


"Protestants...accept Sunday rather than Saturday as the day for public  worship after the Catholic Church made the change...But the Protestant mind does not seem to realize that...In observing the Sunday, they are accepting the authority of the spokesman for the church, the Pope." Our Sunday Visitor, February 15, 1950.

We must understand that everything we have been taught is a lie and we must do our own research and not trust in man to give us the truth, but the word of The Most High God of Israel. Scriptures tells us that "the earth is given into the hand of the wicked" in Job 9:24. That's why scripture tells us to beware of philosophy and vain deciet after the tradition of men and not after the rudiments if the world and not after christ.

Colossians 2:8  Beware lest any man spoil you through philosophy and vain deceit, after the tradition of men, after the rudiments of the world, and not after Christ.