Shalam to all who seek truth and understanding. There have been many articles, essays, and books written about the origin of the rapture teaching. I ask that you please take the time to read the History behind the Rapture doctrine, how it got started who started and then move on to part 2 to gain a full understanding of this False doctrine.

The History Behind The Rapture Doctrine

The "Rapture" teaching was not taught by the early Church, it was not taught by Church of the first centuries, it was not taught by the Reformers, it was not taught by anyone (except a couple of Roman Catholic theologians) until about the year 1830. At the time of the Reformation, the early Protestants widely held and were convinced the Pope was the supreme individual embodiment and personification of the spirit of antichrist, and the Roman Church, the Harlot System of Revelation seventeen. This understanding was responsible for bringing millions of believers out of the Roman Catholic religious system. This new scheme of prophetic interpretation became known as futurism. It was a Jesuit priest named Francisco Ribera who, in the days of the Reformation, first taught that all the events in the book of Revelation were to take place literally during the three and a half years reign of the antichrist way down at the end of the age. Thus, Ribera laid the foundation of a system of prophetic interpretation of which the secret rapture has now become an integral part. 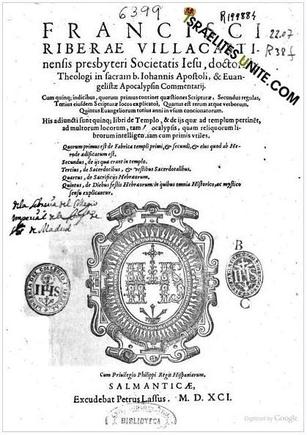 Francisco Ribera (1537-1591) was a Jesuit doctor of theology, born in Spain, who began writing a lengthy commentary in 1585 on the book of Revelation (Apocalypse) titled In Sacrum Beati Ioannis Apostoli, & Evangelistiae Apocalypsin Commentarij, and published it about the year 1590. He died in 1591 at the age of fifty-four, so he was not able to expand on his work or write any other commentaries on Revelation. In order to remove the Catholic Church from consideration as the antichrist power, Ribera proposed that the first few chapters of the Apocalypse applied to ancient pagan Rome, and the rest he limited to a yet future period of 3 1/2 literal years, immediately prior to the second coming. During that time, the Roman Catholic Church would have fallen away from the pope into apostasy. Then, he proposed, the antichrist, a single individual, would:
(So, according to Ribera, the 1260 days and 42 months and 3 1/2 times of prophecy were not 1260 years, but a literal 3 1/2 years, and therefore none of the book of Revelation had any application to the middle ages or the papacy, but to the future, to a period immediately prior to the second coming, hence the name Futurism.) 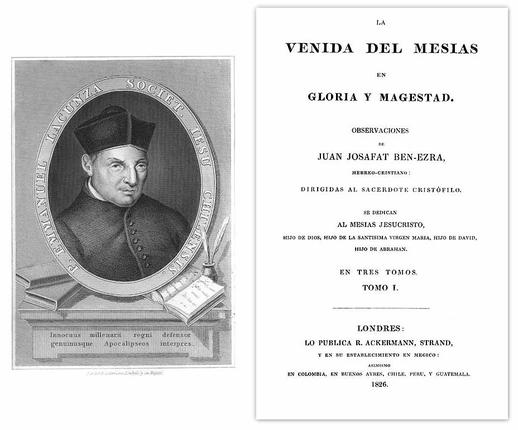 Manuel De Lacunza (1731–1801), a Jesuit from Chile, wrote a manuscript in Spanish titled La Venida del Mesías en Gloria y Magestad ("The Coming of the Messiah in Glory and Majesty"), under the pen name of Juan Josafa Rabbi BenEzra about 1791. Lacunza wrote under an assumed Jewish name to obscure the fact that he was a Catholic, in order to give his book better acceptance in Protestantism, his intended audience. Also an advocate of Futurism, Lacunza was deliberately attempting to take the pressure off the papacy by proposing that the Antichrist was still off in the future. His manuscript was published in London, Spain, Mexico and Paris between 1811 and 1826. 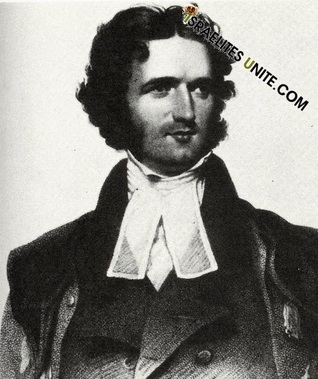 Edward Irving (1792-1834)
Edward Irving (1792-1834), a Scottish Presbyterian and forerunner of the Pentecostal and Charismatic movements, translated Lacunza's work from Spanish into English in a book titled The Coming of Messiah in Glory and Majesty with a Preliminary Discourse, published in London in 1827 by L.B. Seeley & Sons, which included Irving's own lengthy preface. Irving became one of the most eloquent preachers of his time, and a leading figure of the Catholic Apostolic Church of England. In 1828 his open-air meetings in Scotland drew crowds of 10,000 people. His church in London seated one thousand people and was packed week after week with a congregation drawn from the most brilliant and influential circles of society. Irving discovered Lacunza's book and was deeply shaken by it. At this time Irving heard what he believed to be a voice from heaven commanding him to preach the Secret Rapture of the Saints. Irving then began to hold Bible conferences throughout Scotland, Emphasizing the coming of the Messiah to rapture His Church. About this same time there began the emergence of a new movement which came to be known as the Plymouth Brethren. The Brethren movement had its beginning in Dublin in 1825 when a small group of earnest men, dissatisfied with the lethargic condition that prevailed in the Protestant Church in Ireland, met for prayer and fellowship. Soon others joined the fellowship and associated groups sprang up in various places. Though the movement had its beginning at Dublin, it was Plymouth, England that became the center of their vast literature outreach, thus the name Plymouth Brethren became attached. Although there was interest from the start in prophetic subjects, the center of interest was on the body of Christ as an organism and the spiritual unity of Christ of all believers in reaction to the deadness of formalism of the organized church systems and the ecclesiastical hierarchy. A man by the name of John Nelson Darby was the leading spirit among the Plymouth Brethren from 1830 onward. Darby was from a prosperous Irish family, was educated as a lawyer, took high honors at Dublin University, then turned aside, to his father's chagrin, to become a minister.

Margaret McDonald, a 15 year old Scottish girl, and member of Edward Irving's congregation, had visions in early 1830 that included a Secret Rapture of believers before the appearance of the Antichrist. She informed Irving of her visions by letter. Irving then attended the prophecy conferences that began in Dublin Ireland in 1830 at Powerscourt Castle, where he promoted both Futurism and a Secret Rapture. 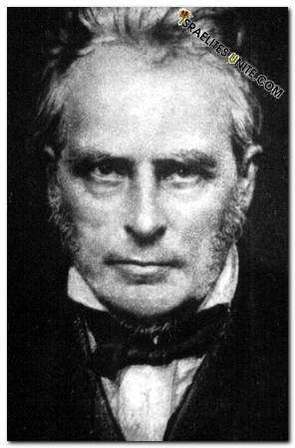 John Nelson Darby (1800–1882),
John Nelson Darby (1800–1882), Irving and Darby were contemporaries, though associated with different spiritual movements. Another series of meetings were in progress at this time. A Church of Ireland clergyman, later with the Plymouth Brethren, also promoted Futurism and a secret rapture. Darby attended the series of meetings on Bible Prophecy that began in 1830 at Powerscourt, Ireland, and at these conferences Darby apparently learned about the secret rapture as revealed by vision to Margaret McDonald, and promoted by Edward Irving, and he soon visited Margaret MacDonald at her home in Port Glasgow, Scotland. Darby later visited America several times between 1859 and 1874, where his Futurist theology was readily accepted. His writings on biblical subjects number over 30 volumes of 600 pages each. Darby developed and organized "futurism" into a system of prophetic teaching called "dispensationalism." Darby's biographers refer to him as "the father of dispensationalism." And the crown jewel in the kingdom of dispensationalism is, of course, the so-called SECRET RAPTURE!. Darby, called the 'father of dispensationalism', was responsible for the widespread dissemination of the new and novel pretribulation doctrine beginning around 1830 through his ministry in the Plymouth Brethern movement. The doctrine soon spread to America and was widely popularized by the Scofield Reference Bible. 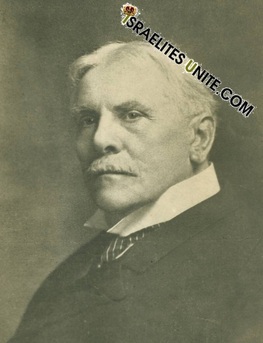 Cyrus Ingerson Scofield (1843-1921)
The Secret Rapture teaching was introduced into the United States and Canada in the 1860's and 1870's though there is some indication that it may have been taught as early as the 1840's. Darby himself visited the United States six times. The new teaching was spreading. A Congregationalist preacher by the name of C.I. Scofield came under the influence of Darby and the Plymouth Brethren. The Scofield Reference Bible was destined to have a tremendous impact upon the beliefs of may, when, three million copies were published in the first 50 years. Through this Bible, Scofield carried the teaching of the Secret Rapture into the very heart of evangelism. Some ignorant souls look on the notes in this Bible as the Word of God itself. I do not doubt for one instant that many who read these lines have been influenced somewhere in their spiritual lives by the footnotes in the Scofield Bible. Scofield greatly influenced by the writings of J. N. Darby, incorporated Futurism in the notes of his Scofield Reference Bible. First published by Oxford University Press in 1909, one million copies were printed by 1930. The Scofield Bible was instrumental in firmly establishing the Jesuit inspired Futurist interpretation in the Protestant Bible schools of the United States in the 20th century.

Source: 1909 edition of the Scofield Reference Bible Footnote 1 on page 1278 (1272) scripture they use for the pre-tribulation rapture.

Source: 1909 edition of the Scofield Reference Bible Footnote 2 on page 1340 (1334) scriptures they use for the pre-tribulation rapture.

Quotes regarding the origin of the Rapture theory

John Walvoord: "any careful student of Darby soon discovers that he did not get his eschatological views from men, but rather from his doctrine of the church as the body of Christ, a concept no one claims was revealed supernaturally to Irving or Macdonald. Darby's views undoubtedly were gradually formed, but they were theologically and biblically based rather than derived from Irving's pre-Pentecostal group". (Walvoord, The Blessed Hope and the Tribulation, p. 47.)

F. F. Bruce: well known Plymouth Brethren historian and theologian says: "Where did he Darby get it? The reviewer’s answer would be that it was in the air in the 1820s and 1830s among eager students of unfulfilled prophecy". (Book Review of The Unbelievable Pre-Trib Origin in The Evangelical Quarterly, (Vol. XLVII, No. 1).

E. R. Sandeen: "Darby introduced into discussion at Powerscourt (1833) the ideas of a secret rapture of the church and of a parenthesis in prophetic fulfillment between the sixty-ninth and seventieth weeks of Daniel. These two concepts constituted the basic tenets of the system of theology since referred to as dispensationalism" (E.R. Sandeen, The Roots of Fundamentalism 1800-1930, University of Chicago Press, 1970)

A. W. Tozer: “Here is a doctrine that was not known or taught until the beginning of this century and it is already causing splits in churches.”

The rapture doctrine, It began as a Roman Catholic invention. The Jesuit priest Ribera's writings influenced the Jesuit priest Lacunza, Lacunza influenced Irving, Irving influenced Darby, Darby influenced Scofield, Scofield and Darby influenced D. L. Moody, and Moody influenced the Pentecostal Movement. When the Pentecostal movement began at the turn of the century, and the Assemblies of God held their first general council in 1914 in Hot Springs, Arkansas, they were a small movement and didn't have their own publishing house. They needed Sunday School and study materials for their churches so where do you suppose they got it? They bought it from Moody Press and had their own cover stitched on it! So what do you think the Assemblies of God people believed? They believed what Moody Bible Institute taught! This had its impact on Pentecostal theology, because in the early years there were practically no pre-millenialists in the Pentecostal movement. Most of the ministers in those early days came from Presbyterian, Methodist, or other historic denominations men who, being baptized in the Holy Spirit and leaving their denominations, joined themselves to the Assemblies of God or one of the other emerging Pentecostal denominations. That is how the Pentecostal movement became influenced and saturated with the 'Secret Rapture' doctrine by a direct chain right back to THE ROMAN CHURCH."